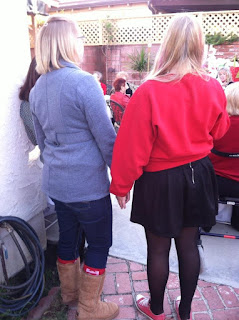 My name is Sara Taylor, Alyson’s younger sister. I am 18 years old, which makes a 6-year difference between my sister and I. Unlike my sister, I do not have Apraxia. Our parents were fair between my sister and I, despite our clear differences, but it’s still not easy balancing between two children yet alone two children of different capabilities.
My parents did a fair job keeping my sister and me as equals. But, also my sister and I grew up in slightly different times. Alyson grew up in the nineties and Apraxia was not a medically recognized speech disorder. There were no blogs, nor walks to connect to other families, and there were no Facebook pages either. No sense of community or thoughts that anyone else was dealing with this same problem.
Even though these deficiencies may have been harder on my parents, it actually worked to my benefit (in a weird sort of way). I was oblivious to my sister's disorder until probably I was about 13 years old. By then I knew the word ‘Apraxia,’ what it entailed, and at 13 I knew more about Apraxia than my sister did when she was 13. I knew something was off though many years before when I was just learning to speak. We were in the car and my sister said ‘Rose.’ However, because of Apraxia, my sister did not pronounce the “r” correctly. I corrected her. And she was convinced she said it right, but I knew we didn’t sound the same.
Also, I would always go to speech therapy with her about twice a week. My dad and I would sit in the waiting room, play games, and read books. I didn’t fully understand what was going on but I did know that my sister never really wanted to go. Once I got older it definitely became harder for me. I would start listening to my parents’ conversations with family friends and all I could hear was about my sister. How she flourished in life. I would always hear how she “overcame her challenges.” As if when she would achieve something, the world stopped. Because I was “normal” the world would never stop for me. I wasn’t mature enough then to know what she was going through, but it felt so unfair at times.
I know that this isn’t just me. Siblings all the time will deal with this same problem. I firmly believe it has to do with their age and if they “understand it” or not.
There are three stages a sibling without Apraxia can be in: They don’t know, They know but don't understand, and They know and understand.
They don’t know. It is up to your discretion as a parent to tell your child about their sibling's situation. My only advice is please don’t use the wording, “Your brother/sister is SPECIAL.” I understand you want to make your child (with Apraxia) feel as if they’re just like everyone else. But in telling their sibling that they’re special is just hurting the other sibling. This will cause the brother or sister to be jealous. Because in their heads they aren’t as special as their sibling with Apraxia. This is the start of resentment.
They know, but don’t understand. This will probably be the hardest stage throughout a sibling’s life and where most of the fighting takes place. For me, this was from about the end middle school until the end of high school. This is the hardest time because it will seem like a competition. A competition on what sibling can obtain the most amount of attention from their parents. This was a really hard time for me because I would always hear how my sister was doing in school. When it came time for her to go to college, it was always about what schools she's got accepted to. Or how she got straight A’s. This was really impressive of my sister, but I was too young to recognize just how impressive it was. Instead, I became resentful. I would go to Apraxia Walks with her and they turned into a family event. When I went to the first one it was extremely hard for me. I would see my whole family would go and was so impressed with the speech she made. But, it caused me to have some internal conflict. I was not very involved in anything important like a non-profit, but I felt that my small events weren’t always as supported. Today, I know there was support, but back then I questioned it. Like my softball games, being long and tiresome, some family members wouldn’t go. Yet, they’d go to my sister’s speeches willingly. ‘Why were my sister’s achievements more recognized than mine?’ This was hard for me to understand; I just became angry, resentful, and often I’d take it out on others.
This stage is inevitable-the competition between two siblings-and parents always try to avoid it but no matter what it naturally happens. Doesn’t make anyone a bad parent, but it’s a good reminder to be fair between all children.
They know and understand. This is what stage you want to get to. For me, it was in college. The sibling(s) will realize what their brother or sister had to overcome and appreciate it. The resentment will go away and the siblings will get along heavenly.


Being a parents with a child with Apraxia is hard. But also balancing between more than one child and even children of different needs is also just as hard.