Blinded By The Lines: Apraxia & Dating 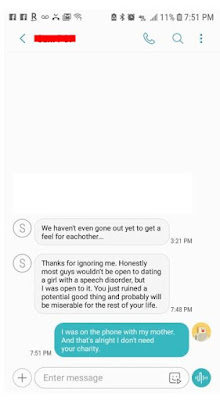 "Honestly most guys wouldn't be open to dating a girl with a speech disorder, but I was open to it. You just ruined a potential[sic] good thing and probably will be miserable for the rest of your life."

I stared at this text message, in the middle of Grocery Shopping, wondering if I was in the wrong for telling a guy that I didn't want to go out with him.

We had a few text exchanges over the course of 5 days and a phone call after 'matching' on an online dating platform.

I did explain (and I deleted it before I screenshotted the image) that I didn't want to go out on a date as I felt we were looking for different things at the time. Also that the whole online dating scene was a bit overwhelming, so I was taking it down completely.

Now I wasn't expecting to read that response from him, but here I was wondering if I should cry, if I was crazy, or if I should be more productive. I chose productivity, hence I screenshotted and have this beautiful blog post (granted writing it about 7 months later, but it's still a blog post!)

I could focus on bullies, their insecurities, or gas lighting in the millennial era of dating.

But I'd rather not.

See on these Apraxia Journeys, we typically fear people not accepting us and our speech disorder. We're afraid of people not taking it seriously, or not taking us seriously.

But this mentality, the simple line of 'most people won't accept you, but I was willing to.'

This introduces a more toxic venom.

It's not the statement itself that's toxic, it's the underlying assumption.

It's the assumption that with a disorder you inherently get less respect, you get to be less selective, you have fewer options of who your friends are, or who you date, and so forth.

You are less, so you get less.

That underlying rationale, that is what's dangerous.

Throw in the self-glorification of people that deem themselves as 'kind' for extending one hand to those with unique needs.

Yet in their other hand, they've yet again drawn the boundary lines of 'Normal People' and 'Special,' or 'Lesser.'

Some people have asked me what it's like dating with this accent. If I try to hide it, if I'm open with it, and what do I say, etc..

My disorder though has quickly become one of my greatest tools. If you want to see someone's true character-see how they treat you when you say you had a speech disorder, Apraxia, and were partially deaf as a toddler.

If they treat you the same, with respect-they're a keeper.

If they treat you with any less respect or decency-big red flag, run away.

I could easily have my speech disorder be my flaw while dating, but it's not. It's one of my greatest characteristics.

It's safe to say that some people- like the one I had texted- assume it is my biggest weakness and vulnerability.

That's what they would see. But they may be too busy drawing those lines between 'normal' and 'lesser' to see past that.